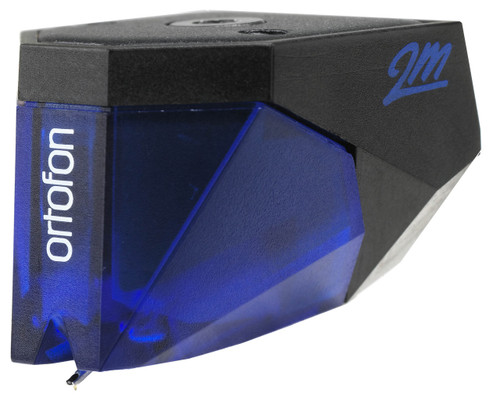 The 2M Red and 2M Blue are designed for precise and accurate retrieval of the information in the record groove. Indeed, it is Ortofon's lasting philosophy to only ever play the recorded sound, without colouration.

To obtain a flat frequency response, as with a Moving Coil cartridge, Ortofon are using split pole pins in the 2M design, to reduce the eddy current. The split pole pins are an Ortofon invention which was originally presented in the 500 and Super OM series, to great effect.

The 2M Red and 2M Blue both use the same engine with split pole pins. With this improved engine Ortofon have been able to increase the output to an impressive 5.5 mV.

The design has been optimized for easy mounting on to a tonearm; the weight and size of all 2M models is well-suited to fit the most common turntables on today's market.

The 2M Red and 2M Blue also have interchangeable stylus units, and replacement styli are readily available in the UK.

About the unique 2M design
2M was developed by Ortofon in conjunction with "Møller Jensen Design" from Copenhagen, Denmark - the same designer who collaborated on the award-winning MC Jubilee cartridge, and the coveted Kontrapunkt series.

The inspiration for designing the 2M was related to the facets of the diamond - elegantly concentrating its contours against the grooves on the record surface.

The name 2M was selected among several ideas. Ortofon wanted a modern name which would be easy to pronounce around the world, and to remember. Therefore an alpha-numerical name was chosen...
2M means MM, which is simply the common abbreviation for Moving Magnet.

The 2M range has been structured in the same way as the popular Rondo and Cadenza Moving Coil series, with ascending quality as you move from Red - Blue - Bronze - Black. The spectacular 2m Black has become the flagship of 2M, and all Ortofon moving magnet cartridges.

2M was also the last product  designed by Ortofon's former chief engineer, Per Windfield. He developed the 2M series over the final 2 years of his 30 year tenure with Ortofon.

All new purchased Ortofon products are backed by a guarantee against defects in workmanship and materials when purchased through Ortofon webshop or an authorized Ortofon Partner. The warranty period is in compliance with local rules of the Ortofon Partner country of residence, but no longer than 2 years.

All defect claims must be returned directly to the Ortofon Partner in the country or geographical area in which it was originally purchased. The product in question must be accompanied by valid proof of purchase.

All products shall be returned in original packaging to comply with Ortofon traceability system. In case of defects, the Ortofon Partner will make initial investigation of the product. If warranty is granted, a new product will be provided.

How Exchange Service works: we offer the customer to buy back his cartridge for 25% of the current price list provided that the customer will buy a new Ortofon cartridge, either equivalent or better model.

Exchange Service cartridges must be returned to Ortofon and will be handled by any authorized Ortofon dealer pursuant to the purchase of a new cartridge. If you should have the need for this service, please contact your local Ortofon Partner.

NB: SPU cartridges are not included in the Exchange program, but in the Special Repair program, please read the below:

The Exchange Retail Value must be less than 30% of the UK SRP of the new cartridge.