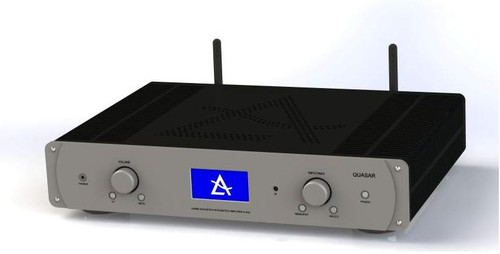 This is one hell of an amplifier. OK The streamer interface isn't the slickest but it works, if you took the streamer out and doubled the price and it would still be an amplifier worth considering. It works superbly with every speaker we have thrown at it including KEF Reference and with the ATC SCM40s the results are stunning.

The Leema Quasar integrated amplifier is the latest iteration in the renowned Leema Spectrum series of products. Sporting the same machined billet aluminium front panel styling as its Constellation series siblings, the understated but classy looks of the Quasar will blend seamlessly with any decor.

Based on Leema’s Elements series topology, dual mono output sections provide incredible power and drive from such a svelte design.
Capable of nearly 200 watts RMS in to 8 ohms, the Quasar is easily capable of driving today’s loudspeakers, no matter how difficult the load, or low the efficiency.
An integrated DAC builds on Leema's renowned Quattro infinity topology, enabling faithful conversion from digital data to audio signal.
Cabled digital connectivity includes three co-axial spdif inputs, three optical inputs and Leema's M1 asynchronous USB interface for the very best reproduction of music files directly from a computer.
In addition, a Bluetooth interface is included that allows high quality audio streaming directly from compatible mobile devices. Advanced audio codecs such as aptX are of course supported.
A streaming board really expands the capabilities of the Leema Quasar.
Capable of handling most formats at up to 24bit/192kHz, playing music from a NAS drive, home network or other DLNA/UPNP device could not be easier. Dedicated control apps for both Android and Apple devices are available. vTuner radio is supported, together with Deezer. Other music services are scheduled to be added.

2 years or 5 years, possibly more. Leema are the sort of company who look after people so don't worry about it !!