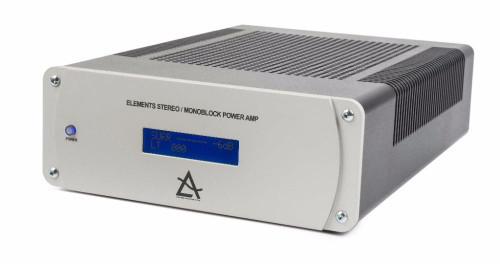 The Leema Elements power amplifier is an incredibly versatile design. A row of switches on the rear of the unit, together with an internal analogue volume control allow the amplifier to be configured for various applications.

The unit can be used as a conventional stereo power amplifier with a pre-amp stage, or can be switched into monoblock mode and used in multiples for stereo or multi-channel systems. When used in monoblock mode, the power output is dramatically increased, offering incredible dynamics and slam in a tiny half-width package.

The Elements Poweramp is also able to use Leema’s proprietary LIPS control system enabling it to be integrated with other Leema system components. It could be used to simply bi-amplify an existing Elements integrated amplifier or, using its on-board volume control, be used stand-alone with an Elements CD player or DAC to produce a short-path purist system without superfluous frills.

The on-board control and volume facilities allow stereo and monoblock units to be mixed in the same system without gain issues. For example, it is possible to bi-amp suitable speakers using three units – two in monoblock mode driving the power hungry bass drivers and one in stereo mode driving the tweeters.

This modular approach allows extra units to be added as funds allow or when more power is required, thereby future-proofing your investment.

Like the Elements Integrated amplifier upon which it is based, the Elements Poweramp produces much more subjective power output than its specifications would suggest. Indeed, in monoblock mode the dynamics give the impression of limitless power in sensibly specified systems.

The design is also very load tolerant and is able to drive loads down to two ohms in stereo mode and even difficult four ohms loads in bridged mode.

Extensive protection systems are incorporated to ensure long term reliability. These include over voltage, under voltage, over current, over temperature and fault detection for speaker protection.

2 years or 5 years, possibly more. Leema are the sort of company who look after people so don't worry about it !!